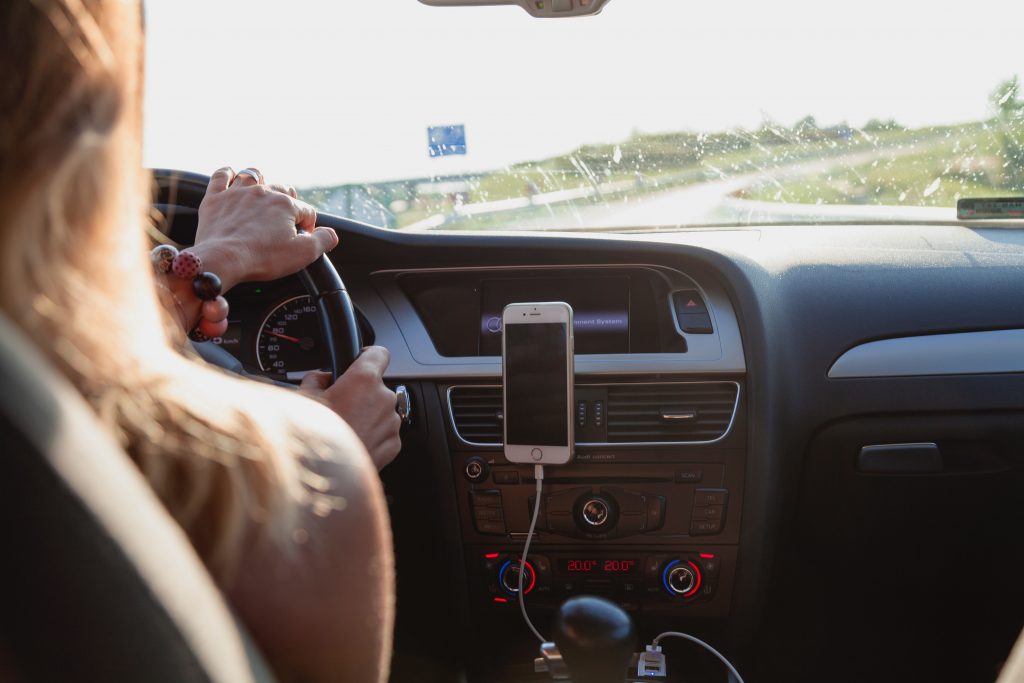 It’s a bit of a staple of workshops on developing the use of digital technology in an organisation that we start off with questions like “what do you want the future to look like?” or “how will you know you’ve got there?”. It gives us a taget to aim at and sets up momentum for the activities but I’ve been wondering recently whether the sort of thinking that encourages creates some false assumptions about building digital capability across a college or university.

It assumes there’s an end point, a moment where it’s reasonable to take the foot off the accelerator and breathe a sigh of relief that you’ve arrived at your destination. The big thing we know about technology is that it doesn’t stand still.

How then can we talk about building digital capability in a way that incorporates the need to plan for change and continuous development?

Shri Footring and I were invited to present at the AoC Create conference back in December and we took this idea with us.

Shri had reminded me a few weeks before about the idea of conscious competence, something I hadn’t really thought about since I was training ther trainers in a previous life.

In a nutshell, it traces the development of new skills through a series of stages that involve varying amounts of awareness and ability.

Take learning to drive as an example. There was a stage, probably very early on, that every driver was unaware that cars were a thing and that it was possible to know how to drive one: unconscious incompetence. Next comes an awareness that there is a skill to driving but it’s not something that that person is able to do yet: conscious incompetence.

While we are learning to drive, both formally and informally, it requires explicit thought to operate the car, technically, safely and legally, but it is possible to do it: conscious competence. The last stage where you are able to execute the skill with minimal thought or reflection. It becomes internalised and instinctive: unconscious competence.

It’s often shown as a pyramid.

When you present it like this it’s tempting to see the end goal in capability development as unconscious competence. But, as the delegates at AoC Create correctly pointed out, there’s a serious problem with that.

Without conscious thought and reflection about what you’re doing and how you’re doing it, it becomes much harder to adapt to changing circumstances. In driving, that could mean something in the moment like a child stepping out into the road unexpectedly, but it can also refer to higher level changes; physical changes in your body and senses, changes to the law, new types of vehicle (ever tried using an automatic for the first time having learnt on a manual?), etc.

As a model, it’s a bit reductive but it gives us a framework to think about digital capabilities in staff and students.

So, Shri and I took a version of the model to AoC but instead of representing it as a pyramid we tried it as a matrix. The idea was to get away from the notion that there was a linear flow to this process. Intead, we wanted to think about actions and responses, particularly for leadership, for capability needs. It could be a way of describing individual capabilities or summarising the state of capabilities within a team, department or institution.

The word incompetent is a bit of a loaded term so I swapped it out for, arguably, a similarly judgemental one, incapable, but at least it’s more in tune with the theme of digital capability. Think of it as “not yet capable”. 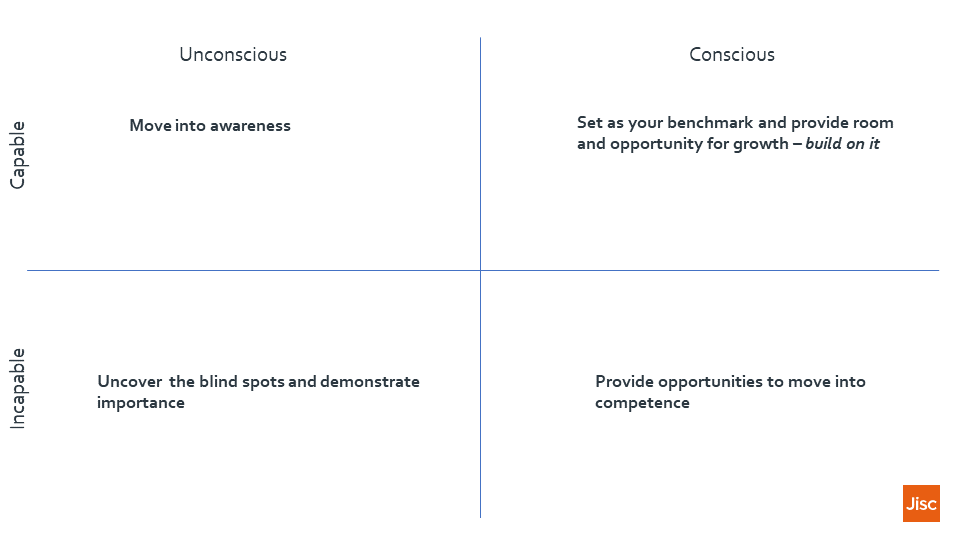 These are the things we don’t know we don’t know! At this moment in time there’s a good chance that I could mention Inrupt and the Solid platform and you wouldn’t yet know what it was let alone how to use it as the basis for a learning environment.

In truth, as my colleague Lawrie pointed out to me, this is a very uncomfortable part of the matrix for people. Acknowledging there are things we don’t know about can be a challenge to our own authority, especially for people whose expertise and authority is central to their role and identity.

In terms of actions, they chould be about uncovering the blind spots. Actively looking at the landscape and seeing how things are developing and what things might emerge over time. Then it’s about deciding which ones are consistent with your strategy and values and moving the topic into…

This is traditionally where traditional skills development activities like training and coaching sit. You’ve made people aware of the skills needed and sold the importance. Now we need to find the resource either from within or from outside to provide opportunities for people to move into capability.

For me, I’d put my coding skills into this bracket. I recognise the value of being able to create cascading style sheets, build things in Javascript and so on, but I have little idea where to start yet.

People are able to demonstrate the required skills and are aware and reflective about them. This is where you take the opportunity to set these behaviours as benchmarks but also provide room for growth, moving towards mastery, letting people become acknowledged experts.

A while back I decided I wanted to learn how to create 360 degree video, and this was the output. I’m still at the stage where, if I wanted to do it again, I’d effectively have to relearn parts of the process as well as finding new avenues to explore or problems to fix.

As we said, this is not your end point. The risk with sets of capabilities ending up in this section of the matrix is that they become ossified and resistant to change: “this is the way things are done around here”. Like driving, with changes in circumstance, society, policy, demographics and so on an institution that was once performing well with these skills starts to fall behind expectations.

Think how you could move these unconscious capabilities into awareness where they can be re-evaluated, reimagined and transformed if needs be. This can be challenging for people. They need to feel able to expose their vulnerabilities by openly reflecting on practice and thinking creatively about alternative approaches. This is as much a question of organisational culture as anything else.

I’d say the activity we did around this was about 60% successful, mostly because it’s hard to explain the framework given it’s overlapping terms and Rumsfeldian “logic” and we only had a short timeframe. The main thing was that next time, we need to provide more in the way of prompts. Next time, the session might look something like this:

Working as a whole group, write down as many different types of digital technology that bear some relation to activities in your institution. It’d be good to have some relevant “unknown unknowns” in your back pocket just to help illustrate the concept of unconscious incapability.

Thinking about your own institution as a whole, pick the dozen or so technologies that you see as being most important for achieving your strategy. On balance, decide where each of these would sit currently in the competence matrix.

Ask yourself, given the explanations in the blog post above, what activities are you currently doing to address capabilties issues with each of the technologies you’ve chosen. Look critically at whether it’s the right activity for the part of the matrix, e.g. running training courses on something people aren’t even aware of yet or can’t see the importance isn’t going to be very productive.

Learning from others in the group about possible alternative activities for each part of the matrix.

It still needs work. You’re welcome to try something like it and let us know how you got on