Someone once challenged me at a conference to think more creatively about what constitutes “digital storytelling” than the form I was espousing at the time.

I want to propose Pianobook as a great modern example.

“…like the piano in my mother’s home” sings Sampha on his single of the same name.

I’m making no claims to great musicianship but I’ve spent many hours of my life playing piano, getting lost in the moment, annoying neighbours and family. I’ve a soft spot for the piano that used to live in the front room of our house in Edinburgh. It wasn’t a great instrument; nothing special and often out of tune. But its touch was familiar and I knew its sound well.

Fast forward to the present day.

We’ve been able to buy a piano for our house but it’s a digital Roland piano. It sounds fabulous, sampled from one of the best grand pianos and reproduced in minute detail in our dining room.

And its sound is heard identically in thousands of places round the world. It’s really nice to play but it’s unlikely you’d develop an emotional attachment to it as an instrument.

I don’t imagine the piano in Sampha’s mother’s home was a Yamaha Clavinova.

Regardless of musical ability, we come to attach stories to the imperfect instruments we play.

Over lockdown I indulged a fantasy and spent rather too much money setting up a micro-studio in my office so I could play around with digital recording. One of the things I was keen to capture was a really good piano sound that reminded me of the piano I used to play as a teenager. 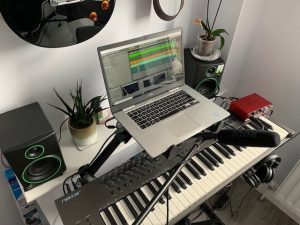 When you’re on a budget, there’s a limit to what you can expect in instrument fidelity, although the cost of “virtual instruments” can be surprisingly low. Nevertheless, I struggled to find piano sounds that really inspired me to play, to get lost in the moment like I used to.

It was through googling for free piano sample instruments that I stumbled across Pianobook. It’s a creative community set up by Christian Henson, co-founder of Spitfire Audio.

Pianobook is a site where musicians and producers create and upload instruments they have sampled themselves. Creating these virtual instruments is no easy task. To do it well, it’s exactly as complicated and time-consuming as you’re probably imagining. But it is reasonably affordable to do. Free tools like Dave Hillowitz’s Decent Sampler mean you don’t have to spend a lot getting started.

Pianobook started life as a place for people to capture the sounds of all these loved, imperfect pianos and turn them into virtual instruments anyone with a computer and a MIDI keyboard can play. According to the site:

Every instrument plays witness to everyone who has played it and every piece of music played on it. This feeds into the DNA of the sound of the instrument whether it be a battered old piano at your grannies or a concert grand in a renowned venue. The truth behind every performance imbedded into its sonic characteristic cannot be hidden and so was born the idea behind Pianobook, every piano has a story and by playing these pianos you tell that story.

Many of the people uploading their sampled pianos (and increasingly, other instruments and found sounds) include stories describing their relationship to the original instrument.

Here’s an example of one of the piano samples in action, University Piano by Jim Palmas. The piece of music is by Liam MacLean.

So, is this digital storytelling?

Well, it depends on your definition of digital storytelling (DST).

At its simplest, DST is simply about telling a story using digital means. The story is the key and that leaves a lot of flexibility.

If I can download and play one of these instruments, then I’m using technology to interact with that story in a very novel and involving way. I imagine the instrument in its situation (a cold garage in Maine, for example) and perhaps that influences the way that I play it. Maybe the story the creator tells reminds me of something in my own experience and that brings out a new piece of improvisation.

Where this differs from other forms of digital storytelling I’ve tried over the years is that it’s very complex to produce. The software can be expensive and has a steep learning curve. There’s also the need to access recording devices and the instruments themselves which further reduces its accessibility.

DST in its classic form is all about allowing people to tell their own authentic story without gatekeepers interfering and without a requirement for media production skills.

You could argue that Pianobook is doing that to an extent, though. This community of musicians and producers is creating and openly sharing a library of meaningful instruments that anyone can play, rather than having to purchase something that has been expensively and meticulously produced by sound designers working for one of the big music tech companies.

Playing our Roland digital piano is satisfying but I find playing around with Pianobook samples feels more like having a conversation with someone. That’s rewarding in a very different way.

If you have a MIDI keyboard you can hook up to your computer then all I suggest you do is download the Decent Sampler software or Native Instruments’ Kontakt Player (restrictions apply to 3rd party instruments) and download Pianobook instruments to your heart’s content!

For me, I have a project in mind. My granny’s harmonium, rich with stories and probably past it best, currently lives in my Aunt and Uncle’s house in Perthshire so when time and travel allow, I’m going to go up there and try to turn that into a sample instrument to upload into Pianobook.

Before that, I’ve dragged from the attic the first electronic keyboard I owned, a 35 year old Yamaha PSS570. I’m going to re-digitise that and  relive the days from the 1980’s when I thought I was going to be the next Vangelis. 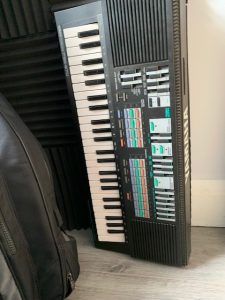