Yes, and they have been for generations

American union leader and civil rights activist Walter Reuther (1907 – 1970) led the United Automobile Workers union of five million auto workers, retired workers and their families. He was recognised by Time Magazine as one of the 100 most influential people of the twentieth century.

Walter was being shown around the Ford Motor plant in Cleveland in the 1950s. A company official proudly pointed to some new automatic machines and said, “How are you going to collect union dues from these guys?”

Walter replied, “And how are you going to get them to buy Fords?”

For my keynote at the second annual NTfW teaching and learning conference, I wanted to focus on robots and Artificial intelligence (AI). I asked our Jisc Sanbot to do the introductions, which she did by video (above). She was able to give her greetings to the audience in Cardiff, emphasise the importance of digital skills for learners and describe the coming session. She demonstrated that she could do at least part of my job as a presenter.

I asked the audience which of their past jobs or tasks were now done by robots, computers or machines. You can see their answers in this word cloud.

I shared a short series of videos, highlighting some of the latest developments in robot employment. Have a look at this bricklaying machine working with humans, cocktail mixing robot arms in Las Vegas, Amazon’s army of little orange bots which bring the shelves to the human packers, and the latest demonstration of driverless cars by Waymo.

The aim was to paint a picture of the modern, evolving workplace, and ask some questions about our delivery for work based learners. Does our practice support twenty first century apprentices and trainees? Are we embedding the digital skills into programmes that enable learners to perform and compete globally?

During this Radio Three discussion in 2015 a panel of experts talked about the kind of jobs that could be automated over the next few years. They argued that in addition to lower skilled jobs, many of the tasks currently carried out by doctors, health professionals, lawyers, teachers, accountants, journalists and others could be done by AI. These would be the more routine and time consuming parts of the role such as marking for teachers or collating statistical news stories for journalists. We have all seen our doctors’ surgeries employ triage, online prescription ordering, phone consultations and other services that save time and resources. In 2015, eBay solved 60,000 disputes online using no traditional lawyers. 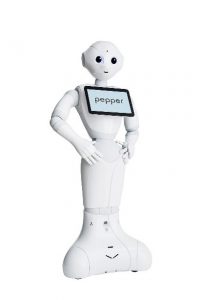 The panel agreed that humans will continue to do tasks where they need to be creative, and have good perception and social intelligence in fields like mental health and social work. Stephen Hawking echoed this in 2016 saying,

“The automation of factories has already decimated jobs in traditional manufacturing, and the rise of artificial intelligence is likely to extend this job destruction deep into the middle classes, with only the most caring, creative or supervisory roles remaining.”

Despite this, two years later robots started to appear in situations that we associate with emotional and moral ability. Here’s a Pepper robot Buddhist funeral priest being sold in Japan at a quarter of the cost of a human priest (per funeral).

I asked the audience if we should be optimistic or pessimistic about our future with robots and AI.  You can see the overall scores from the room in the chart below.

The first two statements were optimistic views of automation and the third and fourth were more pessimistic. The statements were taken from this 2017 Guardian article asking the same question – Meet your new cobot: is a machine coming for your job? You can see that the audience was quite well balanced between optimistic and pessimistic, and this demonstrates one of the challenges. There are so many good things and so many dangers that it’s difficult to choose a side.

Whatever our view though, we need to lay the foundations for our learners and prepare them for the twenty first century workplace with up to date skills and experiences. As learning providers, we must work together and share the latest thinking, the latest ideas and the latest tools and techniques.

You can find the resources from the conference here in English and here in Welsh.