So we have a new species of language – neither written nor spoken but with elements of both.

New protocols, changing spellings, new words and phrases, emojis and icons, memes and gifs – new and evolving ways to express ourselves. Our evolving online language is creative, challenging, exciting and sometimes baffling. And like any language it is used in different ways by different communities, groups and individuals. Often it is used as a badge of identity. Like clothes, cars, hobbies and accessories, language can make up part of who we are and how we present ourselves. 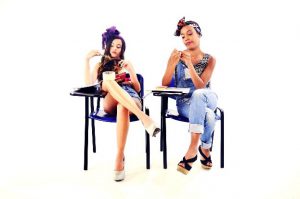 Different communities use language in different ways. I got really interested in the work of Penny Eckert a few years ago when I discovered her linguistic studies of the Jocks, Burnouts and Geeks in high schools in America. You can get more of a flavour of her work in this later paper on adolescent language. My lightbulb moment happened when Penny described the three groups of young people distinguishing themselves from each other by clothes, accessories, behaviour and language…

Slang often originates with young people, multicultural communities, armed forces, political movements and so on, and becomes assimilated into mainstream language, only to be replaced by the next generation of alternative language! Think of the multitude of words from a range of past cultures which sound perfectly ordinary to us now – youth words like cool, wicked, like; rhyming slang like butcher’s, porky, barnet, raspberry; military terms like doolally, lousy, snapshot, scrounger; criminal underworld terms like chum, rumble or knock off.

In fact we can often identify an online community by the way the language looks. Think of the Twitter community for example. We see a piece of text under 140 characters long, it has a #hashtag perhaps – the name of the poster is preceded by @name. They may mention other community members with @names, and a tweet will often contain a shortened link and an image or a video or gif. If you are in the process of learning how to use Twitter for professional practice, this is an excellent guide. 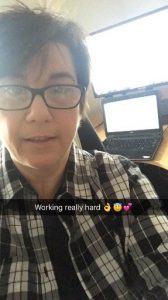 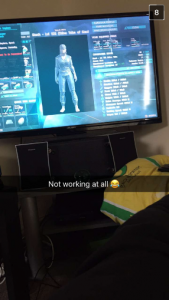 You can also identify a snapchat message by the way it looks – it will have an image and a text box over the image, often containing words and emoticons. You can employ filters over the images and draw on it too. One of the interesting things about this is that the images are part of a real time conversation, not special records of special times. The messages disappear within a few seconds of being opened or they can be added to a shared group story which lasts for 24 hours. It’s a tool for now – no comments and no likes… There’s a good article here if you want to know more.

There are lots of communication apps and social media sites that are identifiable by the way the language looks and feels, but I’ll describe just one more.

Facebook users will recognise the layout of this status and comment. The first comment includes a profile photo and the poster’s name is blue highlighted so we can click on them and visit their profile page. Under the comment there is a time stamp and blue highlighted ‘like’ and ‘comment’ for friends to interact. (There are more interaction choices on Facebook now.) We can see that three people have liked it, and one has commented. The commenter’s profile picture is also shown and we can click on their name which is also blue highlighted. There is space to write your comment too.

It’s possible to identify communities such as Reddit, Imgur, Tumblr and many others by the use of particular words and phrases, and some communities will even mock others about their use of language! Imgur has a handy glossary so that new arrivals can find their way around the site, translate the acronyms and understand the in jokes. Users have also come up with their own glossaries like this one which are designed to make newcomers feel more welcome.

If you are looking to become part of an online community, lurking is a good way to get used to its language protocols and behaviours. I have been lurking around some communities for so long now, it’s embarrassing… I don’t know if I will ever make a comment on Imgur, even though the community comes across as loyal, comradely and welcoming to newcomers. But one wrong move – posting a selfie, promoting a product, using Tumblr language, reposting too soon, plagiarism – and the wrath of the community is upon you.

We should legitimise and support various communities’ development of language as we move through time, but we also have to be aware of the dangers of extremism and the existence of malign communities that also use a sense of identity to draw vulnerable people in. Use of language can be a warning sign in some cases that a person is identifying with a community that might cause us concern.

Language use is part of the identity of communities – you can be included or excluded depending on your understanding and use of language and behaviour, and people have to be able to learn the language etiquette that will enable them to be a part of the community they want to belong to. Online language evolution enriches all our languages and it helps our communities to thrive.

(If you would like to see some of my favourite examples of creative online language, here’s a link to my Tumblr collection of artefacts, articles and amusing memes )

(You can read sections of the PhD here )

(Have a look at Jisc’s work on digital capability here )